Do We Even “Do” Pentecost?

This Sunday is Pentecost. You’ll know it by the red paraments (altar cloth, Bible marker, pulpit drape). Sometimes our ministers don a red stole on Pentecost. This is the ONLY Sunday in the year when the paraments are red, which symbolizes the fire of the Holy Spirit. 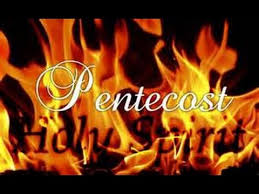 All Christian denominations which profess belief in the Trinity (Father, Son, Holy Spirit) are “pentecostal,” in that they profess that the Holy Spirit is a direct presence of God within their lives.

Pentecost is a happy, celebratory day, often called the birthday of the Church and the start of the church’s mission to the world.. The word is actually Greek (pentekoste) meaning “fiftieth.”

Our Congregational roots back in Anglican England called this day Whitsun, or WhitSunday, due to the white robes donned by those who were baptized that day. It might also be due to the old Anglo-Saxon word ‘wit’, meaning ‘understanding’, to celebrate the disciples being filled with the wisdom of the Holy Spirit. But so far there’s no indication our church has ever used that term instead of Pentecost.

Perhaps the name didn’t cross the Atlantic with the Puritans because Whitsun was often celebrated by the English gentry with horse races. We do know that up to Newbury (VT), the congregation in 1803 was admonished to rein in their youth who right on Main Street were all liquored up and buggy racing on Saturday nights. Apparently the sermon worked; there are no more buggy races up and down Newbury’s main drag.

Do we even “do” Pentecost? Well, yes! Over the years we’ve often encouraged each other to wear a bit of red on Pentecost, to symbolize the joy of the day and our commitment to heed the call of the Holy Spirit in our lives. See you on Sunday!

Here are some other Pentecost traditions past and present:

In far east Roman Catholic churches, at Vespers of Pentecost, they conduct a service of “genuflection,” accompanied by long poetical prayers and psalms.

In the Russian Orthodox church, people celebrate by carrying flowers and green branches in their hands to services.

In Italy it was customary to scatter rose leaves from the ceiling of the churches to recall the miracle of the fiery tongues.

In Sicily Pentecost is called Pascha rosatum. The Italian name Pascha rossa comes from the red colors of the vestments.

In France, it was customary to blow trumpets during the Divine Service, to recall the sound of the mighty wind that accompanied the Descent of the Holy Spirit.