Were the whole realm of nature mine,
That were a present far too small;
Love so amazing, so divine,
Demands my soul, my life, my all.

Isaac Watts, “When I Survey the Wondrous Cross”

Jesus rising from the dead; wolves and lambs feeding together; no one hurting or destroying on all this holy earth: Easter is about a magic, a love so amazing, so divine that it leads to miraculous peace and joy.  You would think the world would see this beautiful, harmonious vision and feel this amazing, divine power and give its soul, its life, its all, and follow its way.

The problem is that Easter’s path is in competition with other paths that seem just as magical in their ends but more conventional in their means.  Easter’s path is the reverse of violence, it is the path of nonviolence, but our culture’s violent path is so often the magic we choose.

Children discover at an early age that violence works like magic.  Two pre-school brothers were at a family gathering.  The four-year-old saw his three-year-old brother playing on the floor with a few wooden blocks.  He walked over, plopped down, and grabbed the blocks.  Then he turned his back and began playing with them while his little brother sat stunned.

The little boy looked as if he might cry, but instead after reflecting for a few seconds, he turned, picked up the entire box of blocks and dumped them on his brother’s head.  Then he began happily playing with something else, as his brother plotted his next attack.

As if by magic, violence got the older boy what he wanted.  He wanted the blocks, and maybe he wanted to annoy his little brother, and violence got him both.  Then the younger boy did his own magic trick—he made all his frustration and humiliation disappear with a simple flick of violent revenge.

The deep magic of violence goes all the way back to the dawn of time.  Adam and Eve ate the illegal apple in the Garden of Eden and then hid from God, doing violence to their relationships and the harmony of the world.  One of their sons killed the other out of greed and pride.  The human race began a spiral of violence that seems to have no escape.

But if we go farther back in the Genesis story we find a deeper magic from before the dawn of time.

In the beginning the Spirit of God moved in the darkness over the face of the waters.  The Hebrew word translated “moved” means literally that the Spirit brooded like a mother hen over her eggs or hatchlings.  If the name of the deep magic is violence, the name of the deeper magic is love.  Easter is all about this kind of self-giving, creative love—a love so amazing, so divine that it offers us an escape from the endless spiral of violence.

The scene that the children acted out today comes from a chapter entitled “Deeper Magic from Before the Dawn of Time” in C.S. Lewis’s book The Lion, the Witch and the Wardrobe.  The merely Deep Magic from the Dawn of Time gives the White Witch the power to claim the life of the boy Edmund because he betrayed his brother and sisters and the good creatures of Narnia.  But Aslan, the loving Christ-like lion, sacrifices himself to save Edmund.

Edmund’s sisters, Susan and Lucy, watch the Witch kill Aslan on the Stone Table, and then they go and tend to his dead body, just as the women watched Jesus be crucified and then tended to his body.  They are looking away when they hear the table crack the way the stone rolled away from the tomb like thunder.  They find Aslan standing there the way Mary found Jesus, alive and stronger than ever.

Aslan comes back to life after his nonviolent sacrifice of suffering love and goes to war to kill the enemies of Narnia, resorting to the magic of violence to gain peace, but this is not how it was after the first Easter on earth, as we will hear next Sunday.  Christ’s way to peaceful ends is through peaceful means, he creates peace in the world by giving his followers peace in the heart.  The early church was very diverse, having different beliefs and ways of interpreting the gospel, but they were in complete agreement that following Christ meant adhering strictly to nonviolence. They refused to kill or fight in a war or even hurt anyone in self-defense.  They believed that Christ absolutely ruled out violence.  They held fast to that principle for the first three hundred years, until October 28, 312, the day the Emperor Constantine painted symbols of Christ on his army’s shields at the Battle of the Milvian Bridge, leading to Christianity becoming the official state religion of the Roman Empire (and its soldiers) in 380.

The principles of nonviolence were preserved in the gospel teachings and life and death of Jesus, even as Christian nations failed to live up to them, to the point that Christian killed Christian over differences of belief in some of the most horrific wars and persecutions in history. Over the millenia there were notable individuals and groups that tried to reassert the original way of the church, St. Francis, for instance, and the Amish, Menonites and Quakers.  The Rev. Dr. Martin Luther King Jr. and thousands of Christians in the American Civil Rights movement of the 1950s and 60s returned to that original way of nonviolent self-sacrifice and creative, self-giving love.

Children learn the Deep Magic of violence, but in 1963 in Birmingham, Alabama they learned the Deeper Magic and taught it to the whole world.  Just when things were looking hopeless for freedom in that city, a young African-American minister, the Rev. James Bevel, organized what came to be known as the Children’s Crusade.  Children poured out of the Birmingham Schools and started marching.  At first they were sent to jail, children as young as eight years old among them, but the jails were soon crammed overfull.

Then the brutal Sheriff Bull Connor tried to stop them with fire hoses powerful enough to strip bark off of trees, and police dogs trained to bite.  The world saw news footage of black children marching or kneeling in prayer or singing hymns who were then attacked by the white police force, and the world finally understood how violent racism was.  It was the turning point in the entire Civil Rights movement.  The Deeper Magic working through those children woke the conscience of America, just as the Deeper Magic working through Christ’s self-sacrifice and resurrection woke something in people two thousand years ago and continues to do so to this day.

Isaiah was prophesying to a sad, weak nation in exile that had seen its temple and beloved city of Jerusalem destroyed.  He said the astounding words, “Be glad and rejoice in what I am creating, for I am about to create Jerusalem as a joy and its people as a delight.”  This is the joy that Mary Magdalene felt when her tears of grief turned into a cry of gladness in that Jerusalem dawn.  The Deeper Magic brings a power of joy that works a change in those who feel it or witness it.

Love so amazing, so divine works miracles, it rises and raises from the dead, it transforms lives, it transforms churches.  Notice, though, that Jesus says to Mary, “Do not hold onto me,” and then he sends her out to share the good news with others.

This is what the love of Christ wants to do.  It wants us to pass it on to others who in turn will pass it on to others.  That is how the realm of God establishes itself on earth, one person, one home, one church, one community at a time where Christ-like love keeps rising and sending us out to shine Easter light.

Love so amazing, so divine comes not through sermons but through experience.  We are touched and embraced by that love, we breathe its aroma, we walk in its warm breeze and sunshine, we sit in its beautiful, spirit-filled sanctuary.  Its deeper magic fills us.  It inspires and empowers us to put our love to work helping others.

And here is the joy of this Easter day.  It is not just that Jesus rose from the dead two thousand years ago and said, “Mary.”  It is that he has risen from the dead this year and said your name and my name.  He has said, “Bradford Congregational Church.”  He has said to us, do not hold onto me, but go out and tell your brothers and sisters, your neighbors and friends.  Tell the world about the love you have found here.

Go out and tell them that here is a place where people with different views and beliefs can work together and walk together as a loving community even as they disagree, open to and affirming of all.  Our nation is longing for such a beloved community.

Go out and tell them that here is a place where healing happens, where forgiveness happens, where newness of life happens, where acts of mercy, justice and peace happen.  People out there are longing for a place of transformation and spiritual growth that will make a difference in their lives and in the world.

Go out and tell the young families you know that their children will be cherished here.  Tell them their children will learn a deeper magic from before the dawn of time, an amazing, divine love, and their children will learn to pray and connect to the source of that magic and learn how to wield it themselves.  They will learn to be at home in a house of worship, they will learn how wonderful it is to sing and light candles and talk about big important things with their peers.  They will know for the rest of their lives that if they ever get lost or in trouble, they can look for a steeple and find under it a congregation eager to offer their care and support.  Go out and tell young families all that.

Go, and take the love you find here out into the world around you, love so amazing, so divine that the world will experience through you the deeper magic that leads to peace and joy.  They will see that Christ is risen here.  He is risen indeed, in you.

Let us pray in silence… 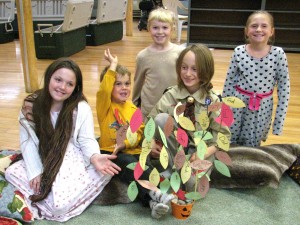