The gospel passage takes place on Easter night.
That day two disciples had seen the empty tomb.
They believed Jesus had risen from the dead
but still did not understand what it meant.
Mary Magdalene had seen Jesus,
but he had told her not to hold onto him,
and sent her back to tell the disciples.
When it was evening on that day,
the first day of the week,
and the doors of the house where the disciples had gathered
were locked for fear of the Jews,
Jesus came and stood among them
and said, “Peace be with you.”
They needed peace,
their world was turning upside down
and now suddenly here was Jesus
passing through locked doors and solid walls.
The house he appeared in was stifling with the fumes of oil lamps
and the scent of anxious human sweat.
The disciples were sleep deprived, terrified, traumatized,
and ashamed of what they had done or not done.
There were tears and raised voices and tense silences.
Jesus passed through those locked doors like a ghost,
but instead of bringing heightened terror,
he brought peace. Instead of sending them out
screaming, questioning their sanity,
never wanting to go anywhere near each other
or any reminder of Christ again,
he sent them out with the power of his love,
he formed them into an orderly beloved community
to do the same good works he did
and bring his message of light and life and love
into the hard, dark world that had killed him.
He breathed into them the Holy Spirit
to guide and empower them,
to give them the courage and sense of purpose
that they needed to unlock those doors from the inside
and go out among the Jews and Romans they feared,
boldly doing and saying the same things
that got Jesus killed.

Later we will sing, “Now the Green Blade Rises.”
It is a beautiful poem, and it captures aptly
what is going on in the story in John,
The hymn says:
Now the green blade rises from the buried grain,
Wheat that in dark earth for many days has lain;
Love lives again, that with the dead has been:
Love is come again, like wheat that rises green.

When our hearts are wintry, grieving or in pain,
Christ’s warm touch can call us back to life again;
Fields of our hearts that dead and bare have been:
Love is come again, like wheat that rises green.

Today’s gospel passage is not just a ghost story,
it is not just the story of the beginning
of the Christian church as a church,
it is a story played out over and over
in all Creation, every spring as earth rises green,
and every time the human heart
shows its resilience rising to love again.
The story of Jesus coming through that locked door
is the story of the entire universe
and this planet and our life on it.
Earth formed 4.6 billion years ago
from the gas and dust debris
of another star and solar system that had exploded
in a supernova. We have no idea
what those former planets were like.
All we know is that the material came back together
to form this sphere, and there were collisions
with asteroids and another planet,
crucifixions and resurrections on a cosmic scale,
a dark tomb of nothingness exploding periodically
into the light of volcanos and molten rock.

Gradually over a billion years the violence subsided
and a stable atmosphere formed
and waters covered the face of the deep,
and the five chemical ingredients
needed to form life mingled in the waters,
and one miraculous day the most basic
one celled life form came into being.
Imagine that day, 3.8 billion years ago.
There should have been angels blasting trumpets
and the most glorious fireworks dancing in the sky,
because think of what evolved out of that day,
when more than three billion years later
the first creatures crawled out of the water onto land,
leading ever so slowly to the rule of dinosaurs on earth
for two hundred million years,
and fifty million years after the dinosaurs
the first apes appeared,
and millions more years went by,
and then two hundred thousand years ago
homo sapiens began to walk this earth.
One hundred and ninety-eight thousand years
after those earliest humans,
Jesus walked through a locked door,
and changed things almost as dramatically as the day
billions of years before when that first life form appeared.

And in a real sense, it was the same event,
it was the same force, the same intention,
the same new thing coming into being yet again
that had come out of the supernova.
The same new thing was coming into being
when Jesus walked through that locked door
as we see in bluebirds and daffodils and green blades rising,
the same new thing coming into being over and over,
in an infinite variety of forms:
the force of light and life and love
that takes the raw materials of basic elements
and combines them into living things
which then find within themselves
the desire to live and make more life
and adapt and create around them a habitat
conducive to more and better life.
From the Big Bang to the baby born today,
it is one event, the expression of this one force.
In the beginning as Genesis says,
this force, this Holy Spirit, brooded over the earth
like a hen over her eggs.
It brought life into being and instilled in it
the will to create more light and life and love.
Genesis tells how God made the first human
by taking the elemental dirt of this world
and shaping it and breathing the Spirit into it,
and when Jesus came through the locked door
into that room full of scared, sweaty, confused,
grief-stricken, hopeless yet hoping
disciples, it was once again the force
of light and life and love collecting scattered pieces
that violence had made incoherent and useless
and breathing the same Holy Spirit into them
and giving them the peace they needed in order to live
and giving them a renewed sense of meaning and purpose
to go out and adapt and create around them
a habitat conducive to more and better life
for all the world.
Do you see how the history
of the universe led to that moment,
and from there to here, as one eternal expression
of the light and life and love that we call God?
This is who we are as living beings
and who we are as followers of Christ,
it is who we each are as individuals
and who we are as a church. We are born to be
the body of Christ, the body of the force
of light, life and love that created the universe,
as it lives and works in the world.
Now the green blade rises, from the buried grain.
Love is come again, like wheat that rises green.
In all the expanse of billions of years
before and after us, this is our moment,
this is our place, and Jesus is walking in this door
right here, right now, saying “Peace be with you,”
loving us and forgiving how we have strayed
from the sacred way. He breathes into us the Holy Spirit
and sends us out to do the work
of the cosmic force of light and life and love,
to contribute great complex creative works
like children or jobs or churches,
or small single cells of kindness and compassion.
This is our time and place, our chance
to contribute our part. The question is, of course,
what does the God who created the universe
and Earth and all life over billions of years
need us to do in our place and time
for the sake of light and life and love?
What can we do in response to Jesus walking through
the locked door and sending us out?
We do not have to look far for the answer to that.
The first living cell knew,
the first millipede to crawl out of the waters knew,
the tiny brained giant dinosaurs knew,
and God has breathed the Spirit into us
so that we can know by listening deeply
to our innermost soul, to the dream of our heart’s core.
If you have questions about your calling as an individual,
I would be happy to help you seek it.
You have done extraordinary work as a congregation
to discern what God is calling you to do and be.
You want this to be a comfortable place
for worship and spiritual growth,
you want to cherish this church’s children,
you want to share the gifts of beautiful music and inspiring words,
and serve the community with resources
including this building and your material and spiritual support.
You say, “We are precious to one another
and seek to build a beloved community
in which our faith can grow.”
“We pledge to work to end oppression and discrimination
whenever we encounter them, and,
guided and empowered by the Holy Spirit,
to help create the beloved community of God’s realm.”
And you say, “We will seek ways to incorporate the spirit
of our Open and Affirming covenant in our church life,
including worship, mission, outreach and education.”
These are some of the green blades that are rising
in the field of this congregation right now.
These are what Christ is sending us out
to nurture in the growing season ahead.
We may never understand fully why our tasks have fallen to us.
We can see our society needs models of beloved community,
we can see that the future of the earth
depends on congregations nurturing a new generation
with beauty, peace and the spiritual wisdom of the ages.
But we cannot and do not need to see where it is leading,
all we need to know is that the same force
of light and life and love that makes the green blades rise
is at work making us rise in our day
to do this meaningful and important work.
Love lives again, reborn in this sanctuary
as it has been countless times over two hundred years.
Let us rejoice and be glad in this day that the Lord has made.
I look forward to walking with you
as we follow where the Spirit leads us
on this most exciting and sacred way.
Let us pray in silence… 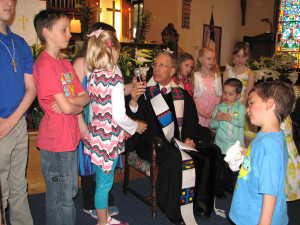