You Have Given Me an Open Ear
Rev. Thomas Cary Kinder
The Congregational Church of the United Church of Christ,
Bradford, Vermont
January 15, 2017
Second Sunday after Epiphany
and Martin Luther King Jr. Sunday
Psalm 40; Isaiah 49:1-7; Luke 4:14-21

Someone accused Representative John Lewis
this week of being all talk and no action.
Few in Congress have put their life on the line
in courageous action as often as John Lewis.

During the Civil Rights Movement he was Chairman
of the Student Nonviolent Coordinating Committee (SNCC).
He was one of the original Freedom Riders.
He was beaten by mobs, hit in the head
with a wooden crate, put in jails
where blacks before him had died.
Nothing stopped him. He rode or sat in or marched again,
was attacked again, was jailed again.
He was the leader in front of the famous march in Selma
on Bloody Sunday. He had his skull fractured
by the club of a policeman on horseback and was tear-gassed
but refused hospitalization, insisting on going back
to the church to comfort and encourage the people.
John Lewis has been elected to Congress 13 times
by 70 percent or more of the vote in his district,
and has been extremely active,
working for peace, justice and human rights.
Most recently he took the bold action
of leading a sit-in in the House of Representatives
for greater gun safety after the shooting in Orlando.
Calling John Lewis all talk and no action is as ridiculous
as saying it about Martin Luther King Jr.,
and yet for both men, words were an essential part of action.
They heard the cries of oppressed and suffering
people around them, and those anguished words
inspired King and Lewis to action, including speaking out,
and their words inspired others to action.

We are currently considering adopting a set of words
that could declare this congregation to be
open to and affirming of people of all sexual orientations
and gender identities as well as other groups
that historically have been excluded or treated as inferior.
If this congregation votes to speak out, it will be because
we first heard and listened to their voices,
and because we hope that our words will inspire other actions.

Today’s scriptures talk about the importance
of hearing and being heard.
The Psalm says, “The LORD…heard my cry.
He drew me up from the desolate pit….
He put a new song in my mouth,
a song of praise to our God.
Many will see…and put their trust in the Lord….
Sacrifice and offering you do not desire,
but you have given me an open ear….
I have not restrained my lips, as you know, O Lord…
I have spoken of your faithfulness and your salvation.”
The Psalm interweaves speaking, hearing and acting.
We cry and God hears and acts to save us.
God acts and we sing praise
for God’s faithfulness and salvation.
Many others see and hear us, and they cry out
from their own desolate pit.
God gives us an open ear to hear them.
We act in response, doing for them
what God did for us.

The Prophet Isaiah, too, interweaves speaking,
hearing and acting. God gave Isaiah an open ear.
God gave him words for others to hear.
God made his mouth like a sharp sword—
“Listen! Pay attention!” he said.
His words were translated into the people’s actions
and served as “as a light to the nations.”
Isaiah’s people were deeply despised by the world,
oppressed as captives and slaves to the rich and powerful
of Babylon. They cried out to God, and God heard.
God opened their ears and gave them a new word.

In today’s gospel passage, Jesus was invited to speak
in his home synagogue. He read from Isaiah,
“The Spirit of the Lord is upon me,
because he has anointed me to bring good news
to the poor. He has sent me to proclaim release
to the captives and recovery of sight
to the blind, to let the oppressed go free.”
Jesus said, “Today this scripture
has been fulfilled in your hearing.”
The Spirit spoke and Jesus heard.
Jesus spoke and the poor heard and the captives heard.
His words were not just words,
they were the beginning of their own fulfillment.
Those with ears to hear throughout the ages,
have proclaimed what Jesus proclaimed,
and acted as he acted.

Today we are remembering a man
descended from slaves, a man suffering
from oppression and discrimination and hatred,
a man who had ears to hear these words of scripture
and courage to speak and act upon them.
He marched, he went to jail, he was stabbed,
his house was bombed, his wife and children
received death threats, as did he.
He was helping garbage men,
sanitation workers in Memphis, Tennessee,
he was speaking and working on behalf
of all poor and oppressed people in America
when he was shot and killed.
Yet it did not silence his voice.
His words still are as sharp as a sword.
They still move us. God gave us
Martin Luther King Jr. and his soaring oratory,
God gave us ears to hear, and our hearing
inspires us in turn to speak and sing and act.

Vermont Interfaith Action is a nonpartisan coalition
of over forty spiritual communities in Vermont
representing over 10,000 people of faith.
Many United Church of Christ churches and leaders
are involved. As the national election
got increasingly polarized and hateful they heard
that one of the few black state representatives
in Vermont had been receiving racist emails.
Then after the election swastikas appeared
near Vermont synagogues in Middlebury and Burlington,
and the Islamic Society of Vermont received hate mail.

Vermont Interfaith Action has asked congregations
all over Vermont to respond with what they call
A Sabbath of Listening and Healing
to spend time in prayer and worship listening
to the voices of the vulnerable in our midst,
listening to their concerns for safety and inclusion,
listening in a deep way and then acting
for healing and for justice in our communities.

Our outgoing and incoming governors
also heard and spoke. They issued a joint statement
in response to the hate during and after the election.
Governors Shumlin and Scott wrote,
“At this time of national discord,
Vermont can present a united voice
urging compassion, commitment to community,
and fierce dedication to equal rights and justice….
Even in the face of the ugly, sometimes discouraging,
reminders of how much further we must go in our pursuit
of equal rights and a just and tolerant nation,
we will not be deterred. Instead, we will be more resolved
to help where there is need;
listen where there is frustration;
and act where there is injustice….
Together, we’ll defend the rights and freedoms of all….
The nation is counting on us to do our part – and we will.”

Today one of the cries we are hearing
is from African-American and Hispanic Vermonters.
A study has just come out reporting
that they are far more likely to be stopped
for a traffic violation then those who are white,
and they are five times more likely to be searched
after being stopped if their skin is black, even though
the percentage of people found with contraband
is much higher in searches of white people.
The study shows that our police across the state
are racially biased, at least in action if not in intention.

The good news is that God has given
our leaders the ears to hear, and their hearing
has led them to speak out,
and we can hope that their words will lead to action.
Vermont’s Department of Public Safety Commissioner
as well as the director of Fair and Impartial Policing
and Community Affairs for the Vermont State Police
have heard and said, “We need to acknowledge this,
we need to be held accountable for it
and we need to work on it.”

It is deeply moving in a world
where totalitarian fascism is on the rise
to see what President Calvin Coolidge called
“this brave little state of Vermont”
having the courage to listen to the vulnerable
and oppressed, and speak bold words
on their behalf, and act to make things right.

The Psalm, Isaiah and Jesus heard and spoke.
Their hearing and speaking were political actions,
just as they were for John Lewis
and the Rev. Dr. Martin Luther King Jr..
Our governors and public safety and police officials
are hearing and speaking as spiritual actions.
This is the goal that Jesus held out to us
with the first words of his ministry.
Repent, undergo metanoia, change
your heart and mind, he said, for the realm of God
is at hand. Live as citizens of God’s country
even as you are citizens of this country.
Make the political and spiritual life one.
As King said, “The Kingdom of God
will be a society in which
men and women live as children of God should live.
It will be a kingdom controlled by the law of love.”

Our first act as citizens of God’s realm
is to listen and hear the cries of the vulnerable
and the oppressed and those in need.
Our second is to speak as a form of action,
naming what we have heard, calling others to action.
Our third is to do acts of loving mercy, justice and peace.
This congregation has been serving community dinners
and putting together Church World Service kits.
Our Board of Mission and Social Action has been
promoting the welcoming of refugees to Vermont
and helping us provide for their needs.
The Deacons have been serving people in times of crisis.
We have been teaching troubled churches
the ways of healthy communication
and beloved community. God has given us ears to hear.
God has given us a mouth that speaks as a form of action
to change the world. God has given us
opportunities to lift others from the desolate pit
as we ourselves have been lifted.

We can feel joy at the power and glory
of God flowing through us in these ways.
We can feel joy at the power of the love
that is becoming the law of our church, and through us,
becoming more the law of our town and world.
Let us pray or reflect on this in silence
using the ears to hear that God has given us
to catch the cries of the vulnerable and oppressed
and the whisper of the Holy Spirit
inviting us each in our own way
to speak and act right now… 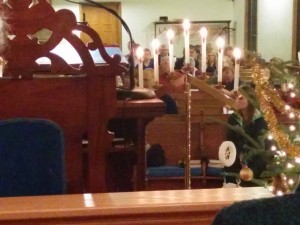