Who Is the Neighbor I Am to Love as Myself?
Rev. Thomas Cary Kinder
The Congregational Church of the United Church of Christ,
Bradford, Vermont
July 10, 2016   Eighth Sunday after Pentecost
Psalm 25; Luke 10:25-37

Today we read the version of our Identity and Aspiration Statement that was edited to be a unison reading. Many of us prefer the sound of it to the original, but there is one thing that bothers me, even though I helped write it. It leaves out one small part of the original statement that seems crucial.

Here is what got left out: “We aspire to grow in numbers as we make this an increasingly welcoming, loving, helpful congregation.”

I feel fine leaving out our aspiration to grow, because if we fulfill our other dreams growth will naturally happen, and “welcoming, loving, and helpful congregation” is already in the unison reading. That leaves only one word missing. Listen again, to see if you catch it. “We aspire to grow in numbers as we make this an increasingly welcoming, loving, helpful congregation.”

The crucial word is “increasingly.”

Increasingly is the key to fulfilling our aspirations. Increasingly is the secret to growing as a congregation. Increasingly is our only hope in the struggle against the violent forces of fear and hate that are tearing our world apart. Christ dreamed that his followers would establish the God’s realm of justice, mercy and peace on earth for all people, and the fulfillment of that dream depends completely on increasingly.

We lose as a church if all we try to do is stand our ground and continue being what we have been, because there are forces at work pushing hard against us.

Senator Bill Bradley was a former star basketball player for the New York Nicks. He was famous in college for how hard he worked to improve his game. He explained his philosophy saying, “When you are not practicing, remember, someone, somewhere else is practicing, and when you meet him he will win.”

The forces that oppose Christ’s way of love, the forces that work against the establishment of God’s realm on earth, are practicing all the time.

We can see those forces at work in the story of the Good Samaritan. They have not changed much in the two thousand years since Jesus saw them play out on the Jericho road.

That road was so dangerous in Jesus’ day that it was known as the Way of Blood. It was winding and uninhabited, perfectly designed for ambush.

The forces that oppose the realm of God and Christ’s love were hard at work in first century Judea, driving people to become robbers. Some were revolutionaries against the Roman Empire that had invaded their homeland. The revolutionaries gathered in the wild hills and operated as bandits, robbing the rich to support their cause. The violence of empire bred violence on the Jericho Road.

Other robbers had been driven to desperation by an unjust economic and social system in which they felt their only way to survive was to steal. The same system inspired other robbers to hate the rich and powerful for oppressing the poor, and violent crime was how they got revenge. We can imagine that some robbers were just greedy, and some were driven by inner demons like rage that they could not contain that drove them outside the law, and some had addictions that made them unable to hold down a steady job and demanded money to keep them fed.

We can imagine those kinds of forces were at work then, and we know they are at work now in the terrorist breeding grounds of the Middle East and the gang breeding grounds of American cities and even where poverty and addiction breed crime in New Hampshire and Vermont. The rich get richer, the poor get poorer, addictions of all kinds are epidemic, and the powers of government and the super-rich grow more hopelessly monolithic. We live on the Jericho Road.

Other forces that oppose the realm of God were active that day. A priest and a Levite walked by the Jew who was bleeding, half-dead, on the side of the road. They represented the religious establishment. The story does not say why they passed by—it could have been fear of violating a religious tradition about purity, or fear of a trap, or it could have been that they felt their work too important and their time too precious to get involved. These forces still block religious people from following the way of Christ’s love.

And one more set of forces was at work. A Samaritan came along and saw the beaten and robbed Jew. Samaritans and Jews feared and hated one another. They were enemies. Today we still see prejudice like that aimed at people because of their race or religion or nationality or some other aspect of their humanity.

Everyone hearing the story for the first time in Luke’s day would have thought that if a priest and a Levite passed the man by, surely his enemy the Samaritan would do the same. But the Samaritan turned out to be a citizen of the realm of God. He showed Christ-like compassion and love. He did not just pause and say a kind word. He did not just help the man sit up until some other helper could come along. The Samaritan tended the Jew’s wounds and carried him to an inn and took care of him and then paid for someone else to provide care until he could return.

The Samaritan overcame fear, hatred, prejudice, the impulse to run away from trouble or shy away from strangers, the instinct of self-concern and self-protection, all of which block the free flow of love.

The reason why the story turns out to be about the triumph of love is that the hero ventured to love increasingly. The priest and the Levite loved decreasingly, they succumbed to the forces in the world that constrict love. If the Samaritan had loved to the full measure of what would be considered ideal by the social and religious traditions of his society, the Jew would been left lying in the ditch. But the Samaritan loved increasingly, extravagantly, and pushed back against the forces opposing God’s realm.

The story of the Good Samaritan starts with a lawyer testing Jesus, asking who is the neighbor I am to love as myself, according to the great commandment?

Who in our day is that neighbor? How can we know?

The 25th Psalm says, “Make me to know your ways, O God; teach me your paths. Lead me in your truth… God leads the humble in what is right, and teaches the humble the way. All the paths of God are steadfast love and faithfulness for those who keep God’s covenants and decrees.”

We know our neighbor by humbly praying and listening to God and obeying the great commandments as Christ interpreted them. That means that we love increasingly until there are no more limits and no people excluded from our love.

This sermon is being preached in the shadow of the mass shootings in Orlando, and the shooting in Dallas that was a violent protest against the murder of many young blacks by police, and the massacre of a whole Bible Study in a black church in Charleston a year ago, and the burning of many black churches since then.

It is easy to understand why we need to love increasingly when we look at the issue of race in America right now. It is not enough to say we respect people of other races, or we are tolerant of their presence among us. The force of prejudice and fear and hatred will win if are not increasingly welcoming and loving. We have to go beyond passive good will to acts of lovingkindness whenever we encounter a person of another race, taking every opportunity to be neighborly and to become friends in order to overcome the social context of racism today.

We are a predominantly white congregation. People of other races coming to worship here will be uncertain whether they are welcome as full members of our family, because that would not be the case in every church. Sunday morning is still “the most segregated hour of the week” as the Rev. Dr. Martin Luther King Jr. called it. To be increasingly welcoming and loving would mean that every one of us would go out of our way to get to know strangers of another race and seek ways to support and include them in our church and community activities.

Race is not the only defining characteristic of people we need to welcome increasingly. I am sure you can think of other members of society who are suspected or attacked because of who they are.

And what is true of those specific groups is also true of every person who comes through these doors for the first time. The forces that oppose the love of Christ and the realm of God have been hard at work creating an ever more fractured, isolated, alienated society, and they are at work within our own shyness or fear of the stranger. We need to welcome, love and seek to help every stranger increasingly, in the same ways we need to include people of other races increasingly.

Should is a word I generally avoid, but strong language is required about this. Newcomers of any race should never rise from their pew without many people reaching out and inviting them down to refreshments. They should never enter the vestry without many people seeking them out, eager to hear how they are doing and to share life together. If newcomers need support of any kind the word should go around and many people rally to offer it. They should never go uninvited to pitch in on a church activity or help another person in the congregation.

And how many of us who have been coming here a long time love one another to the extent that Jesus is calling us to do in the story of the Good Samaritan? Can you say with absolute certainty that we cannot welcome, love and help one another more?

I ask this not to invite you to feel guilty, but to feel joy. To love as extravagantly and unconditionally as Christ is to make his joy complete within our hearts. We enter the realm of God, and we spread it around us when we keep asking ourselves how we can love increasingly.

A church that does this will grow, and the community around it will change for the better. There is no end to the goodness that will come of it. There is no telling how many Orlandos we may prevent by the love we increase in this sanctuary. There is no telling how many Dallases will remain nonviolent, or how many churches will not be burned. All I can tell you for sure is that the world has a desperate need for us to live up to that word in our Identity and Aspiration Statement, and the people we should increasingly welcome, love and help are all around us right now.

Let us pray in silence… 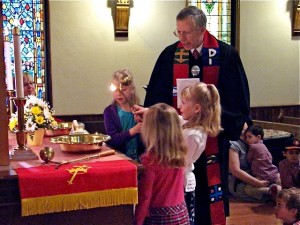