Although I come from a legacy of wheat farmers, I would not describe myself as someone who has a green thumb.  This year however I have found that there is one thing I have an incredible knack for growing – WEEDS!   We have had an abundance of rain and what that means is everything is growing in spades it seems especially weeds.  What it also means is that there aren’t enough sunny days to keep up with pulling them all.  So I’ve had to do some letting go about wanting my garden to look a certain way.  When I can do that what I’ve noticed is that there seems to be more of creation’s critters around – more bees, more birds enjoying the shade and feasting off of the vegetation.

May the words of my mouth….

This morning we hear yet another parable from Jesus as he tries to teach his disciples.  Jesus’ preferred method of teaching was by telling stories – parables.  In fact scholars tell us that almost a third of Jesus’ teachings come in the form of parables.

Over the last couple of weeks, the gospel reading has introduced to this idea of kingdom of heaven through parables many of them using the planting of seeds.  I call these parables – the horticulture of the heart stories – Jesus’ victory garden.  This parable – the parable of the mustard seed appears in all three of the synoptic gospels – Matthew, Mark and Luke.  And in all three it is distinctly noted the seed in question is the “the smallest of all the seeds.” Now while that not be totally accurate – poppy seeds are certainly smaller mustard seeds would have been a familiar item in the Middle East in Jesus’ time.

The kingdom of heaven comes from something small and in unexpected ways.

So what is this parable about? –perhaps the subtitle of this parable should be “good things come in small packages” – how great things can come from small things –Etc. A small act of kindness can go a long way – like offering a smile to a stranger can be just the thing that could turn around a bad day or a feeling of loneliness.

Mother Teresa whose quote you find in your bulletin this morning also has another quote that speaks to this notion of finding the kingdom of heaven in the small things – “If you can’t feed a hundred people, then feed just one.” It’s easy to feel overwhelmed by the needs of the world – so much violence, poverty, that it seems like a small gesture would have little effect.  I know I often feel that way but that’s when I remember a quote from spiritual master His Holiness the Dalai Lama who says “If you think you are too small to make a difference, try sleeping with a mosquito.”

I’ll tell you that one of the first things I think about when thinking about “small things” is the saying “Don’t sweat the small stuff… and it’s all small stuff.” The saying is actually the title of a book by Dr. Richard Carlson originally published over twenty years ago and with more than 25 million copies in print. The book talks about how we spend far too much time worrying about minor irritations and frustrations and not enough time generating gratitude and hope.  It seems that we have a way of latching onto the negative “small things” and barely noticing the life-giving things that we encounter every day.

The kingdom of heaven is in everyday things already amongst us.

The stories Jesus tells us about the kingdom of heaven are down to earth – literally! They are common stories about ordinary people – a farmer, a baker, a fisherman not kings and heroes.  These ordinary folks are doing everyday things. Not exactly the exalted vision of God’s realm one might expect.  As Christians, we are called to believe in the incarnation, the word made flesh, the mystery of the meeting of the divine and human in the person of Jesus.  In this parable Jesus is bringing that same incarnational focus to the world around him.  The kingdom of heaven is like the most common things in human life. For the people of Jesus’ time – seeds, some leaven and fishing nets.  Take just a minute and think about some every day, common thing you interact with – can you find the kingdom of heaven within it? Our busyness, our distracted minds, and our preconceived notions often keep us from seeing the kingdom of heaven that is already in our midst.

The kingdom of heaven is within those things that are considered nuance, cast away, or without value.

Another interpretation of this parable is that among the items Jesus compared the kingdom of heaven to were things that were considered a nuisance or unclean.  Although there is some scholarly debate about this, some claim that in Jesus’ time the mustard plant was essentially considered a weed – a seed that grew into a “trash tree.” No farmer in their right mind would purposely plant a mustard seed unless they were prepared to be completely overrun by it.  There were far more valuable crops to be planted.  Can you imagine planting a field of weeds?

I laughed to myself while studying this scripture over the week. All the gardener imagery reminded me of the scene in the Gospel of John where Mary encounters Jesus at the empty tomb and “mistakes him for the gardener.”  Had Mary heard Jesus teach this parable there would have been no way she would have mistaken him for the “gardener.”

Here too the second part of this parable talks about the leaven added to three measures of flour.  The leaven or yeast in this story is not the stuff we think about that comes in those little brown jars or packets found in your local grocery store.  This is akin to sour dough starter which is begun with a fermentation process.  It’s called sour dough for a reason – it’s sour.  During Jewish holy days the houses were wiped clean of this “corrupt” item and only unleavened bread was eaten.

Jesus however had a propensity for turning things on their heads – the last shall be first. Jesus befriended, lifted and allied with those who society oppressed or rejected – women, children, the poor, those suffering from disease or mental illness.  In all of these Jesus saw the kingdom of heaven where others only saw a nuisance, something unclean or something to be cast aside. 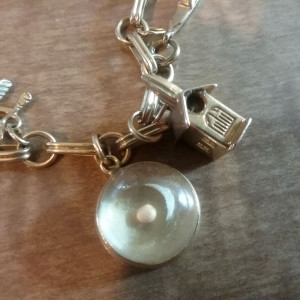 As I mentioned there is scholarly debate that centers around the worth and value of a mustard seed at the time in history when Jesus would have been sharing this parable. One such scholar is Jewish Biblical scholar Amy-Jill Levine who argues that a mustard plant since it was native to the Middle East would have likely been seen as a valued crop.  Mustard seeds are commonly used in the cuisine of the Middle East especially in India and ancient civilizations were more likely to have been aware of its medicinal properties.

She also refutes the interpretation that Jesus was using the seed as a metaphor not just for the kingdom of heaven but for the “planting of the church” amongst his disciples. However, these Christian interpretations would never have been heard by Jesus’ original Jewish audience.  So bottom line from this scholar anyway is maybe a seed is just a seed.

So what is a seed?  It is the remnant of a plant.  A seed is what’s left behind after a plant dies.  In order for the seed to take on new life what must happen to it?  It has to crack open.  Author Cynthia Occelli describes it like this “For a seed to achieve its greatest expression, it must come completely undone. The shell cracks, its insides come out and everything changes. To someone who doesn’t understand growth, it would look like complete destruction.”

First, the seed dies. It finds welcoming soil and morphed into a tiny shoot. In time, with nurture, it grows, a thing of beauty at many levels, all on a scale out of proportion to the original seed. The tree provides shade and shelter, flowers and fruit. It might provide wood for warmth or walls or works of art. It might contribute to a landscape or resist erosion. It might inspire poems or plays, paintings or photographs. It might spark a scientific discovery or host children at play.

How does the kingdom of heaven grow? – when the seeds of love inside of us are cracked open, when our hearts are wide open.  And what can grow from that is beyond measure.  This is God’s horticulture of the heart.

Here’s the thing about planting – it’s going to be messy.  You’re going to get dirty.  Are you willing to roll up your sleeves and dig in?  Can you muster this much? (mimic the size of a mustard seed) Can you remember one tiny thing that gives you hope?  Can you look at something seemingly insignificant and dare to see the kingdom of heaven within it?

Abundance for the smallest things, greatness hidden in our midst, miraculous transformation from a “trash tree” to a tree of life, from corrupt leaven to bread enough to feed all who are hungry – the kingdom of heaven is like that.

Friends – the kingdom of heaven is among us
it is in the planting of a seed,
in the grateful harvest
in the baking and sharing of bread.
The kingdom of heaven is within us and it’s ok to start small
a simple act of kindness toward another
a tiny seed of compassion toward yourself.
Tend those things, nurture them, bring them out into the light so that they may grow.
“Thy kingdom come, thy will be done on earth as it is in heaven.” AMEN.