Nine out of ten lepers in today’s gospel passage did not express gratitude to Jesus. Only one “when he saw that he was healed, turned back, praising God with a loud voice.” 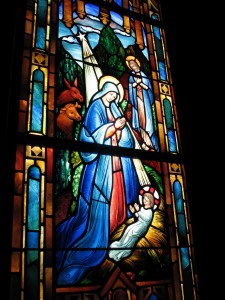 We heard the choir sing the Native American hymn, “Many and Great, O God, Are Your Works.” It talks about God creating the earth and the stars, the mountains and waters. Flaming orange, red and yellow trees cover our mountainsides and reflect in our rivers and lakes. We smell the spicy scent of fallen leaves, we feel the sun on our face, we hear geese overhead—the beauty of the earth can be enough to inspire us to turn to God giving praise with a loud voice.

The Psalm we read responsively also sings praise for God’s great works, but it ends with this strange saying, “The fear of the LORD is the beginning of wisdom; all those who practice it have a good understanding. His praise endures forever.” Fear and wisdom seem contradictory. The popular science fiction book Dune says, “Fear is the mind killer.” You could say that fear of a hot stove is the source of the wisdom not to touch it, but someone I consider extremely smart had a grease fire on her stove and in her panic did a very stupid thing with a pan full of cooking oil and almost burned down her house. Her fear was not the beginning of wisdom.

C.S. Lewis was the author of the Narnia story I told the children today and a writer of many popular theological books. He like others observed that the Biblical phrase “the fear of the Lord” means not fear as we would feel for a tiger or a ghost, but reverence, wonder and awe in the face of something so powerful and vast that we can fall out of our chairs and find ourselves on the floor if we think about it deeply enough.

That literally happened to me the first time I thought about the fact that there is an edge to the universe out there somewhere. We would have to rev our car up to 670 million miles per hour and then drive for one hundred thousand years just to cross the Milky Way. One hundred thousand years at the speed of light would get us across only one of the one hundred billion galaxies. Yet somewhere out there is an edge of the universe as real as the walls of this church, and the universe is expanding—into what? What is beyond the edge? What is so huge that it can contain a universe within it? Whatever it is, God is in it all, and it is all in God. I don’t know how that makes you feel, but it makes me feel something like what the ancient Psalmist may have meant by “the fear of the Lord.”

I can praise a God that is so vast that the whole earth is as nothing, and one human life less than nothing, and yet the love and light of that God fills every one of us down to the tiniest thing on earth. I can praise a God who can set a hundred billion galaxies spinning across the universe, who can fire up each of the hundred billion stars in every galaxy, and yet who also can wire a human mind’s microscopic synapses to get dizzy with the thought of it all, and can flood a human heart with love for one flaming red maple tree in her back yard.

This congregation has seen its share of many different kinds of suffering, and yet it has shown resilience and courageous faith. I love what one of you said to me last week. I asked how she was doing and she said, “I’m fine. My body isn’t, but I am fine!” She reminded me of one of the heroes of the Montgomery Bus Boycot, named Mother Pollard, a good church lady in her 70s. Someone asked her how she was holding up with all the walking the Civil Rights movement had to do, and she said, “My feets is tired, but my soul is rested.”

Martin Luther King Jr. said of Mother Pollard, “I have been tortured without and tormented within by the raging fires of tribulation… I have been forced to muster what strength and courage I have to withstand howling winds of pain and jostling storms of adversity. But as the years have unfolded the eloquently simple words of Mother Pollard have come back again and again to give light and peace and guidance to my troubled soul, ‘God’s gonna take care of you.’”

A member of a church near here was diagnosed with pancreatic cancer when he was only 65. He was a runner, in terrific shape, he was at the top of a distinguished academic career, and he was an extremely positive and funny man. His faith filled him with light.

But pancreatic cancer was not something he could just take in stride. He was told he had six months to two years to live. He had so much more he wanted to do. He was heartbroken and worried to leave behind his blind and diabetic wife, who had been his high school sweetheart. He struggled to maintain his positivity and humor. He held onto his faith for dear life.

He amazed some of us one day when he said that as death drew near he had very little left to say other than to shout, “Praise God!” He felt the urge at the strangest times, like standing in line at Wings or at the recycling center. He was dying, robbed of so many years of accomplishment and love ahead, and he felt moved to praise God with a loud voice.

Recently I quoted Elizabeth Kübler-Ross who said, “The most beautiful people we have known are those who have known defeat, known suffering, known struggle, known loss, and have found their way out of the depths.”

Today’s scriptures show two lepers attaining that beauty. As Kübler-Ross says, “Beautiful people do not just happen.” The leper who returned to Jesus had to overcome the peer pressure of nine friends who did not. He had to overcome natural responses, like a feeling of anger at God for letting him suffer so long, or a sense of entitlement to life’s pleasures after being oppressed and excluded. The leper was a Samaritan, so he also had to overcome his prejudice against his healer who was Jewish and therefore his enemy. The positive light shining from that leper did not just happen—he had to struggle for it, he had to choose it, he had to have enough faith, gratitude and joy to prompt him to do the hard but beautiful thing that nine out of ten would not do.

Naaman had similar internal obstacles to overcome. He, too, was an enemy of the Jews. He did not have faith that washing in the Jordan would work. It offended his pride. Maybe his struggle with doubt and resistance increased his gratitude in the end so that he turned back to Elisha praising God with a loud voice.

We have suffered in our own ways as individuals and as a congregation, and here we are. I suspect that every one of us has plenty of reasons not to praise God. Our feets is tired, our bodies are not well, we are grieving losses, maybe we do not have the income or friendships we want, we are suffering from past wounds, we remember a more flourishing congregation, we feel the search process is taking too long, we’re ready to get this Kinder guy out of here—we all could join the nine lepers who are heading down the road not noticing the healing that has taken place, not feeling enough gratitude and joy to prompt them to praise God with a loud voice.

I suspect we could each be justified in feeling down, but I am absolutely certain we all have reason to be up. We all have our times when we need to grieve, it is true, but if Mother Pollard can say, “My feets is tired, but my soul is rested,” so can we. If the saints around us in these pews can say, “I’m fine. My body isn’t, but I am fine!” then so can we. If a man dying of pancreatic cancer can praise God with a loud voice, so can we.

We as individuals and as a congregation can rise from our defeat, our suffering, our struggle, our loss, and find our way out of the depths. By doing so we give others around us reason to feel gratitude for the beauty they see in us. We dream of being a church that shines like a lighted window into the community, a stained glass window full of rich blues and reds that can lift the heads and hearts around us with hope. We shine every time we choose to turn to the light of Christ with joy for the blessings we have received along our journey. We shine that light every time we find some goodness or grace amid life’s sorrows that makes us turn back and praise God with a loud voice. We shine with every act of love.