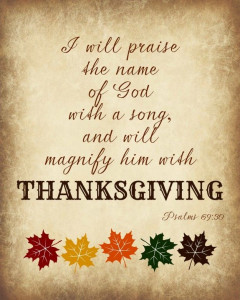 Pastor Jeff says the sermon for Thanksgiving Sunday will be developed from the Matthew 25:14-30 and the key focus will be that Thankfulness should not be limited to what we have received, but should include what we are called to do.

The service will also be a musical offering of thanks and thanksgiving, ranging from the delightful Shaker “Simple Gifts,” to the Netherlands’ folk tune we know as “We Gather Together,” to J. S. Bach’s intricate interweave of “We All Believe in One God.”

“Simple Gifts“ is hands down one of America’s most beloved hymns, composed for his fellow members by Shaker Elder Joseph Brackett in the mid-1800s in Maine. What Brackett did was portray in musical form the core theme of Shaker belief, that a life of simplicity, fully communal, fully uncomplicated by marriage or children, will ready oneself for the Second Coming of Christ. It wasn’t until Aaron Copeland 100 years later inserted this thoughtful theme into his “Appalachian Spring” that we as a nation came to embrace it as our own. It was later used by the celtic “Lord of the Dance” troupe and has often been mistakenly called Lord of the Dance. Musically, Simple Gifts is plain, unadorned, one theme without embellishments. Simple notes. Two simple verses:

‘Tis the gift to come down where we ought to be,

And when we find ourselves in the place just right,

‘Twill be in the valley of love and delight.

When true simplicity is gained,

To bow and to bend we shan’t be ashamed,

To turn, turn will be our delight,

Till by turning, turning we come ’round right.
“We Gather Together”  is a Dutch hymn composed when they were at war with Spain in the 1600s.  Dutch Protestants under the Spanish rule were forbidden to gather for worship. “Wilt heden nu treden,”(we gather together) spoke loud and strong about their intention to be free, and was as much a patriotic song as it was sacred hymn.

The Dutch Reformed Church in North America originally only sang psalms but in the early 20th century they decided to add hymns and “We Gather Together” was their first choice for their first hymnal. By the time of WWII Americans had fully incorporated this hymn into their own congregations due to the lyrics of “wicked oppressing,” in terms of our war against the Nazis and the Japanese. After the war it became to be associated with Thanksgiving … giving praise for being in a land where we can freely congregate in worship.

Musically, “We Gather Together” is quintessential 4 part simultaneous harmony, meant to be sung joyously with heads held high in thanksgiving. The single theme is carried by the treble as the lower voices decorate it with their harmonies and the accompanist plays all 4 voices.

Wir glauben all an einen Gott (“We All Believe in One God”) is a delicious example of what is called fugal counterpoint.  Bach often used fugue and counterpoint to portray steadfast faith, unswerving despite trials and tribulations. In the manuals he “sings” a 3-part fugue. At regular intervals the foot pedals play a forceful repeating theme.

Now imagine singing “Row Your Boat” with the 2nd singer coming in with the same song at a different pitch and THEN a 3rd singer comes in a few beats after that singing “Three Blind Mice.” That is fugue with free counterpoint! That is faith holding firm! That is classic Bach!