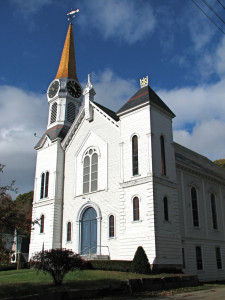 Coming into town from any direction one knows this must be a Congregational church. It’s white, it’s in the center of Main Street, and its steeple points to heaven. This can be said of the vast majority of Congregational churches throughout all of New England. And, this is no coincidence. We are “descended” from the Puritans and the color and location of our houses of worship reflect that relationship.

Today, most people think of the word “puritanism” as something negative, restrictive, forbidding. H. L. Mencken once famously quipped, “Puritanism is the haunting fear that someone, somewhere, may be happy.”

In reality, Puritans were very well read, educated and musical, women as well as men. They drank beer with meals and rum at weddings. They swam and skated, hunted and fished, and played at archery and bowling , just not on Sundays or in the church. The “pure” of the Puritans referred to their worship, their faith foundation. They broke from the Church of England because they considered it corrupt and beyond reform. It was the Puritans who founded Harvard because they wanted no “dumme dogs” preaching the Gospel.

Sparkling white Congregational churches like ours illustrate our connection in history to the early Puritans. Their location, usually smack dab in the center of the town’s main road, is also no coincidence. The church was usually the first public building planted in new communities and in New England, it doubled as the Meeting House. Its construction, its upkeep, and the cost of its preacher(s) was born by a poll tax. Here in Bradford, taxes were levied for lodging, wood, food, and salary for our church’s preachers! These taxes were of course later ruled unconstitutional, but had it not been for them it’s unclear if congregationalism could have survived.

Like our cousins the Unitarians, Congregationalists are very social action oriented, serious about living into Jesus’ admonition that “whatever you did for one of the least of these brothers of mine, you did for me” (Matthew 25:40). This grew to include such important reform movements as abolition of slavery, women’s suffrage, and the many forms of civil rights to follow. We continue to this day to budget for these great missions, to hold community meals and establish food shelves, and to watch out and provide for those who need help.

With any religious reform movement, such as that which produced Congregationalism, comes much intricate history, much more than this one article could encompass. The actual definition and explanation of congregationalism and events such as Covenant, Half-Way Covenant, and the Great Awakening need to be discussed separately. And will be!