We need to begin with a little review.
In last week’s gospel Jesus came through a locked door
into the room where the disciples were hiding in fear,
and it changed the world almost as dramatically
as the day billions of years before
when the first life form appeared on Earth.
And in a real sense, it was the same event,
it was the same force, the same intention,
the same new thing coming into being
as in bluebirds and daffodils and green blades rising,
the same thing coming into being over and over,
in an infinite variety of forms:
the force of light and life and love
that takes the raw materials of basic elements
and combines them into living things
which then find within themselves
the desire to live and make more life
and adapt and create around them a habitat
conducive to more and better life.

Jesus came to the disciples through that locked door
and helped them overcome
their fear and confusion.
Then he sent them out as instruments
of light and life and love
to serve and create the realm of God on Earth.

Today we are hearing about one of the essential qualities
by which we know God’s realm when we see it.
The Psalm says, “How very good and pleasant it is
when kindred live together in unity!”
And Paul says in Galatians, “As many of you
as were baptized into Christ
have clothed yourselves with Christ.
There is no longer Jew or Greek,
there is no longer slave or free,
there is no longer male and female;
for all of you are one in Christ Jesus.”

Jesus in his life broke down walls that shut anyone out.
He had women and children in his movement,
he had Jews and Greeks, he had sinners
and tax collectors, he welcomed all those
his society excluded or oppressed just because
they were different or poor or considered impure.
The movement he led was a united and uniting force.

Jesus showed that the realm of God
was a place where all would be one.
To be in Christ and have Christ in us
is to be one with God and one with all God’s creation,
because God is the same force of light, life and love
flowing through us as through all the universe.

We see God at work as a force that holds together
in a world where things fall apart.
We see that force in the compost or forest floor
where vegetation decomposes and reforms into new life.
We see thousands of leaves break into millions
of microscopic specks that then come together
to feed and form one great oak tree.
We see how under the ground
a forest’s trees are connected as one.
We see in the human body how we are made up
not only of trillions of our own
complex extremely diverse cells—
eyes and fingertips and bones—
but also trillions of other different independent
microorganisms that live on or in our bodies.
We cannot live without them,
and they cannot live without us. We are one.
Brain scientists have discovered
that all human brains are connected
by what they call mirror neurons.
When we see a person put her hand
to her chin, our brain responds exactly as if
our own hand were moving to our own chin.
Some scientists call these Gandhi neurons,
because they make us one, as Gandhi said we were.

We see the same natural law manifested in history,
how God worked through covenants
to hold together the children of Israel
when things were in danger of falling completely apart.
Gandhi used to say that cities proved
that nonviolence, harmony and peace
were stronger forces than violence and division
because otherwise social structures would fall apart
and cities could not exist.

We name this force “God” that holds together,
that brings life out of death, that makes one out of many.
We saw it manifested in Christ.
Today we see it manifested
in the United Church of Christ,
as it tries to hold together Christians
who are so often divided,
and we see it manifested beautifully
in the Congregational Church
of the United Church of Christ, Bradford, Vermont,
which “strives to be a loving church family
where everyone feels welcome and at home,”
as our Identity and Aspiration Statement says,
and that seeks “to create and sustain a congregational life
of inclusiveness” as our Communication Guidelines say.
“Jesus welcomed all,” our Open and Affirming covenant says,
and so “we welcome into full membership
and participation people” who have been made
to feel inferior or excluded in society and some churches.
“We pledge to work to end oppression and discrimination
whenever we encounter them, and,
guided and empowered by the Holy Spirit,
to help create the beloved community of God’s realm.”

Yesterday at Vermont Conference Annual Meeting
your congregation shone its light and life and love
for all to see, and you were applauded for it.
First, the delegates cheered when it was announced
that we had become Open and Affirming.
Then one of the Conference’s great leaders,
retired Pastor Betty Edson, honored us even more.
Betty is part of a group that is training congregations
to have honest, safe conversations
bringing together all viewpoints
to talk about the controversial issue
of reducing gun violence in America.
She told the delegates that the tool
her group is handing out to those congregations
to guide them is the Bradford Congregational Church
Healthy Communication Manual.

Most of all our congregation was applauded
for a presentation that Bridget Peters
and Marcia Tomlinson made at the request
of the organizers of the Peacemakers Breakfast.
People were deeply moved by what they said,
and I thought you would be, too,
so I invited them to present it
as the conclusion of my sermon
on how this force of love and life and light,
the Spirit of God in Jesus Christ
is at work in the world through us today,
making us a united and uniting church…

Conflict! Hooray! Let’s gather in a circle and listen to each other’s ideas!

A few years ago we would never have celebrated conflict as an opportunity.

When the Bradford Congregational Church adopted its Communication Guidelines in 2014, it was within an unhealthy and conflict driven climate, where differences in opinion pitted member versus member.

We were the poster child of unhealthy communication.

Even when we seemed to listen to each others’ perspectives in meetings, good intentions were squashed by driveway mutterings and telephone criticisms.

Yet, we were a community of people who truly cared for each other! When one of us was in need, we would rally our support, no questions asked.

But time and time again we would revert back into that same old unhealthy communication and decision making style.

It was wearing and tearing us down.

We hit emotional and spiritual bottom.

But God had a plan for us.

Our pastor, Rev. Tom Kinder, opened our eyes to see that unhealthy communication was our problem.

That’s when we asked Clinical Psychologist, Ray Chin, to come speak to the Board of Deacons.

He took us through an exercise … to ask the person next to us about his plans for next weekend without asking a question.

We all began talking. It didn’t work.

We looked to Ray for the answer:

“Tell the person you would like to hear what he wants to do,” he advised, “and then just listen,”
2
It was an Epiphanal moment for the Board.

From this meeting, the Deacons began a listening process, to learn what the members of the congregation truly wanted.

“Tell us what this church means to you.”

“Tell us your dreams for this church.”

Out of those meetings came our Identity & Aspiration statement, crafted by the whole membership, not just the leaders.

And we all were starting to listen … not perfectly, but trying to take careful note of everyone’s ideas and dreams … even when they were different from our own.

We invited a professional, Nancy Brown, to come and present the 1st workshop on communication during conflict. Our committee and council meetings were the first to benefit from this, with more members sharing their thoughts.

Workshop #2 was held on successful ways to intervene in conflicts. Again, listening carefully … intentionally … was the key. Since conflict can be over details as small as what coffee to brew, we were learning how to make decisions by listening.

Workshop #3 was perhaps the most difficult, the one in which we learned how to face a conflict honestly and caringly.

We learned about the circle process, in which everyone has the opportunity to speak his feelings without interruption or rebuttal. This very emotionally charged process almost always ends with everyone having an appreciative understanding of each other’s views. From that intense sharing and listening, decisions are made together.

Workshop #4 was about Putting it all together … the components of a beloved community working together, depending on each other.

Effective leadership during times of change and anxiety is necessary for the continued health of the beloved community.

In the midst of the workshops, our Pastoral Search Committee based all its meetings on this wonderful listening process.

The committee partnered with the congregation to develop our church profile. At several stages it was given back to the membership for comment, suggestions, and revisions.

We had never done this before!

And it was a great success due to listening to each other.
The entire membership felt ownership in the Profile.

While we were working on learning healthy communication skills and living into the Beloved Community concept, we were also exploring the idea of becoming an Open & Affirming church.

We were able to use our newfound skills to carefully and lovingly explore sensitive topics, even when not necessarily agreeing with each other.

We became Open & Affirming in a process that used our new healthy communication skills and way of being,

and emerged from this controversial issue stronger and closer,

spirit filled Beloved Community path we’re on has us all eager to see what God has in store for us next.

we’re committed to maintaining a strong sense of belonging and shared mission now.

And it all started by simply … listening. 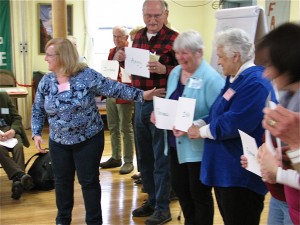