(With Pastor Jeff taken sick on Saturday, I used the same lectionary reading for the basis of the sermon, but instead of Luke 1:52 as he had planned, I chose verse 39, and suggested to the congregation we could call it, “Haste, Haste … but not yet.”)

“In those days Mary set out and went with haste to a Judean town in the hill country …” Luke 1:39

As I thought on today’s reading, it dawned on me that there are many hymns and anthems about Mary being visited by the angel, learning that she would bear a son, fulfilling the prophecy of “Behold, a virgin shall conceive, and bear a son, and shall call his name Emmanuel, God With Us.”

And there are countless hymns and anthems about the birth and what happened next, from “Away In a Manger” to “Angels We Have Heard on High” to “We Three Kings.”

Including one of my favorites: What Child Is This, with its refrain:

This, this is Christ the King
Whom shepherds guard and angels sing
Haste, haste to bring Him laud
The Babe, the Son of Mary

Today is the fourth Sunday of Advent.

Liturgically speaking, we are still in our time of hopeful and patient waiting for the coming of the birth of Christ.

Our modern culture tells us that this is the “Christmas season.” We are sent every kind of message that we only have “so many shopping days left in this Christmas season. Two, if you count today, and I do hope you don’t rush from here to go shopping!

My daughter in law can’t wait for the 24/7 playing of Christmas music on the radio … I’m no better; I start singing along to the Messiah every chance I can get. And, I admit it, watching “It’s a Wonderful Life” and every version of “Dickens’ Christmas Carol.” Last night, to clear my head I put on Gregorian Christmas chants. In other words, I was jumping the gun, listening to the music for the birth, not the advent.

Yet still I seek to keep myself centered in a place of that hopeful Advent anticipation. Rather than the HASTE to get to the birth itself.

This year the Diaconate handed out to every family the “God-Pleasing Christmas” Advent Calendar so that we all could experience an Advent rooted in faith, scripture and prayer, followed by the joy of Christmas. It has enabled us to center into Advent, not in haste but with deliberate thought and prayer.

Today’s scripture lesson was presented to us back in the first week, on that Thursday and Friday. We were given a short prayer: “Lord, help us to slow down for reflection, so that when Christmas arrives, our hearts will exclaim, “Blessed is the Christ child … “ Hopefully we all read that prayer and took it to heart, not to make haste to Christmas without preparing for it spiritually.

This morning’s reading relates what happened shortly after Mary was visited by the angel Gabriel, and was told that she would bear a son and call him Jesus. This young woman, who had not been with her husband yet, was pregnant and “with haste” went to her cousin’s home. What kind of greeting might Mary have been expecting to hear?

Earlier in Luke we learned that Elizabeth, the elderly wife of the priest Zechariah, was pregnant with the baby who would grow up to be John the Baptist. A totally unexpected joy to the long barren couple.

We aren’t told what Mary said when she entered Elizabeth’s home. We can only guess how unsure Mary might have been about what greeting to expect.

What we are told is that when she heard Mary’s hello, Elizabeth felt her own unborn child leap within her womb.

Elizabeth recognized the coming of the Lord in Mary’s pregnancy. How extraordinary! Instead of with scorn or derision, Elizabeth greeted her cousin with praise. And not just praise but a loud cry of ‘Blessed are you among women, and blessed is the fruit of your womb.’ “

After hearing this blessing from her older cousin, Mary was moved to song–in what is often now referred to as the Magnificat, which means “to exalt in song.”

The postlude this morning is based on the Magnificat. As our organist John told us in the Weekly Email this week, the Magnificat is usually translated as “My Soul Magnifies the Lord”.

But apparently the better translation from the original German, is “My Soul reaches to the Lord”. Throughout the piece, John says, Bach seems to be reaching for something until the magnificat theme is completed at the end by the organ’s pedals, when Bach seems to have reached the Lord.

Although Mary went “with haste” to Elizabeth’s home, she took the time to declare:

“My soul magnifies the Lord, and my spirit rejoices in God my Savior, for he has looked with favor on the lowliness of his servant. Surely, from now on all generations will call me blessed;”

And we are told she stayed there for several months, presumably getting the care and rest and reassurance she needed.

A woman I work with is expecting. She’s due Christmas Eve, but told me she’s hoping that labor will wait till after Christmas. I can understand that. She wants her 3 year old to have the tree and stocking and gifts before her baby brother makes his debut.

The family has been waiting since last Spring, all through summer and then Fall. Now that winter has come, so too has the due date. Tomorrow! But meanwhile, the family is in that timeless state of anticipation.

This anticipation is what we call Advent. A time to prepare. To get ready, yes?

Yet where are the hymns and anthems as we wait?

“Come unto Him all ye that labor, all ye that are heavy laden and He will give you rest.”

Every woman who has been “heavy laden” with a pregnancy at this time of year understands this prophecy in a very personal way. 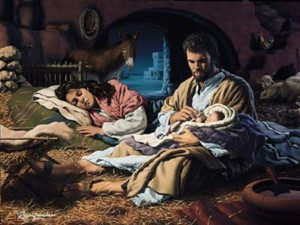 The picture I showed the children this morning (shown here) is similar to one which recently spoke to me, one that shows a stable’s rough and dark interior. The view out the door is of distant hills under a sky bright by a single star. Inside, a few animals are bedded down for the night. Hay is scattered here and there on the hard-packed dirt floor. On the other side is the feed trough, a manger, the hay in it matted down by a small blanket. Laying peacefully asleep on that blanket is a swaddled human baby. Sitting upright, his back against the wall is a watchful man, peering out at the night scene, yet giving one the impression of being transformed by a new responsibility. Next to him, laying down with her head in his lap, is an exhausted young woman, in a deep restorative sleep.

This is the scene after the long hours of labor, after the birth, but before anyone else knew of it. It’s a soft, quiet scene of rest. Before the world realized THIS baby was the one foretold. No one yet is hastening to the scene. I wanted the children to see a painting like it, to take in the thought that before all the shepherds and kings and festooned trees and secular hoopla, there was just a new family at rest.

The haste we’re thinking about this morning was Mary’s just after learning she was pregnant. Not yet married. Scared, perhaps.

She needn’t have worried. Elizabeth greeted Mary with love and joy and hope.

Mary’s response was the outpouring of rejoicing in the knowledge of God’s presence–the Magnificat. Then she spent several months in emotional, physical and spiritual preparation, so that when the time came, she was ready.

Now it is our turn, to slow down our urge to make haste

to reflect on the importance of Advent

to calm down the impulse to rush

to take those spiritual deep breaths

There will plenty of time on Christmas Day to “haste, haste to bring him laud, the babe the son of Mary.”