It may be the most famous passage in the whole Bible. Bumper stickers do not even quote it or say what book it is from, they just list the number 3:16. It says, “For God so loved the world that he gave his only Son, so that everyone who believes in him may not perish but may have eternal life.”

That verse is often used to define who is in and who is out of God’s love. I was shocked once at a gathering of people who were training to become pastors of various denominations when one seminarian claimed that he was the only Christian there. His church insisted that Christians had to believe its particular very narrow set of doctrines. He condemned every other seminarian even though they were giving their entire lives for the love of serving Christ. To him, the phrase “everyone who believes” in John 3:16 was a high border wall his church built to shut illegal aliens out of God’s realm.

And yet the next verse says, “Indeed, God did not send the Son into the world to condemn the world, but in order that the world might be saved through him.” God was not shutting a border, God was opening it. God loved the world before there were any Christians. He sent Jesus so that we could see more clearly what it looks like to live as a child of God on earth, and how God’s realm of love and life and light works when we establish it around us.

God loves this world even when it is full of doubt. God loves the human heart even as frail and flawed as it is. God still loves it after Adam and Eve, after Cain, even after David kills Uriah and steals Bathsheba. God loves the longing for God in the most fallen heart, and God opens the door to any lost person who has enough faith and trust to go looking for a higher power of love and life and light that can save them “from all evil” and “preserve their going out and their coming in from this time forth and even forevermore.”

I do not think that the seminarian who denied the Christianity of all his fellow seminarians was following the way that Christ taught and showed us, and yet I am sure he longed for God. I am sure he was part of “everyone who believes,” so my view of God’s realm has room for him, too.

It gives me joy to say that. I do not know where he is now. He was an African-American, raised in poverty by a single mother in an inner city. He had been a member of a gang and had probably been saved from a violent, early death by his church. I do not know if he went back to that city, but I can picture him going into the streets to try to save the lives of others who were lost in that wilderness and longing for a way out that would preserve their souls, a way that would lead to a home that no drugs or weapons or poverty could take away.

It gives me joy to open the door of God’s realm to him and those like him, as different as we may be. I can imagine that it gave Paul joy to be throwing wide the door to women who had long been treated as inferior, and to Gentiles and slaves.

I know this church has shared in that joy. Martina Stever responded to the proposed Open and Affirming Covenant in a letter to the Diaconate that she gave me permission to quote. She said,

I have been a member of the Bradford Congregational Church of the United Church of Christ for sixty years. In all that time I have never witnessed prejudice or discrimination of any kind. In fact I have been pleased that we have been ‘ahead of the times’ regarding situations that may have been issues elsewhere. Just a little history:

This has been my Church family whom I have loved.

I can say the same. This is the church family that I have come to love deeply in my short time here. It is the church family that said in its Communication Guidelines, “We seek to create and sustain a congregational life of inclusiveness, honesty and safety. We are precious to one another and seek to build a beloved community in which our faith can grow.” It is the church family that said in its Identity and Aspiration Statement, “We want our faith community to be a safe, comfortable place for worship and spiritual growth…. We aspire to…make this an increasingly welcoming, loving, helpful congregation where we take the love we find here out into the world around us…. We dream of being a church that shines like a lighted window into the community, a beacon for social justice.”

This church family’s love makes me love this church family, but imagine how much love someone feels who finds a home here after being shut out by society or by another congregation. Ask a former gang member how passionate he is about the church that loved and saved him.

A guest presenter at one of our sessions about sexual orientation and gender identity talked about growing up in a UCC church out west. She felt loved by that congregation, yet not entirely safe because although they supported the Civil Rights Movement, they never talked about people who were different the way she was.

She moved to Vermont and was part of a very welcoming church that knew she was a lesbian, but when the subject of Open and Affirming was raised, they decided not to pursue it. She realized that although everyone was very nice, she could not be sure they really affirmed her as she was. It broke her heart. She moved on, continuing her lonely journey in search of a church home that would affirm everyone who believes.

She told us the story of walking into a church for the first time on Annual Meeting Sunday. People were extremely friendly and invited her to stay for the potluck and the meeting. It happened to be the day they decided to undertake a study of becoming Open and Affirming. She volunteered to help, and even as a new person was welcomed. She has been completely at home there for over twenty years now. She has served on every Board and as Moderator. She has made sure that people who attend for the first time know without doubt that everyone who believes is a full member of their church family.

The other day I said again that I am neutral on whether this congregation should become Open and Affirming, and someone scoffed at me. They thought it was obvious that I was in favor of it. Maybe you do, too.

The initiative to explore this issue arose in the Search Committee because prospective pastors will assess the congregation based on the stand it takes. This is why I remain neutral on what you should do: the single most important thing about the outcome of this vote is that it should represent who you truly are.

Like it or not, we live in a society today that is divided. Some churches that say “All Are Welcome” really mean it and others mean that only those they approve of are welcomed into full participation. Some churches mean everyone who turns to Christ with a longing heart when they say they are for “everyone who believes” while other churches mean only those who believe exactly the doctrines that their congregation embraces. Like it or not, it is important in our society today to make clear to the world which kind of church we are.

That decision is entirely up to you. The worst thing that could happen would be for a pastor to convince you to vote one way or another. It needs to be the Spirit moving through you that blows where it chooses. Lent is a time to open your heart wide to let the Spirit guide you, as it guided Jesus on all his journeys, and now especially we need that guidance, so let us turn to God with longing in our hearts and allow the Spirit to speak. Let us pray in silence… 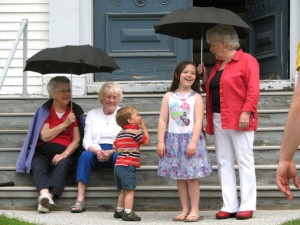