This is one of the most beautiful services of the church year.  The children will bring in the greens to decorate the church during the Prelude, and they, along with members of the Search Committee, will light the Advent candle of Hope.  We will sing three  classic and beloved Advent carols, “O Come, O Come Emmanuel,” “Wake, Awake for Night Is Flying,” and “Watchman, Tell Us of the Night.”  We will sing a Benediction set to the oldest Advent tune, a plainchant that has been sung daily during Advent in monasteries for over a thousand years.  We will hear scriptures with a message of hope and teachings on how to live in hope. 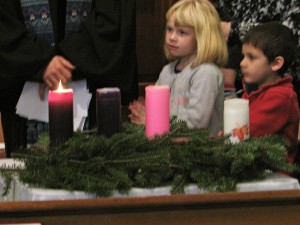 The choir will sing an Advent hymn from Spain as the introit, “Toda la Tierra (All Earth Is Waiting).” They will sing “Ah! Think Not the Lord Delayeth” as the Anthem with a text by one of the great hymnodists of the early 20th Century, Percy Dearmer, set to a J.B.König tune.  Organist John Atwood will play three pieces from the Baroque era, one by Johann Sebastian Bach and the other two by his cousin, J. G. Walther.

Here are two of the organ pieces, starting with a Walther chorale prelude based on the hymn “Wake, Awake for Night Is Flying.”  The second is the Advent piece by J.S. Bach that John will play as the Postlude.