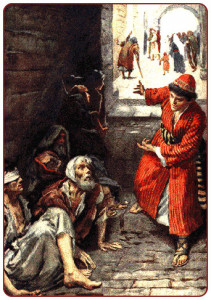 A party is being thrown – a wedding, actually. All the invited guests have something better to do so they don’t show up. Did that stop the father of the bride? No. He told his slaves to go out and get anyone they can – good and bad, rich and poor. It didn’t matter. But wait. There is a problem some slob showed up in a tee shirt and shorts. Not okay. So the father has him thrown out and then Jesus says at the very end of the story, “Many are called but few are chosen.” With the sermon titled “Dressing for the Occasion,” what would you preach about?

This is the question Pastor Jeff is asking us to consider this Sunday, October 15th when we gather to worship at 10 a.m.

The final hymn of this week’s worship service will be the old revival “When the Roll Is Called Up Yonder.” Click here for a rare ukulele version to play as you read the back-story of how this hymn came to be.

James Milton Black was born in 1856 in New York. Around 1881, he moved to Pennsylvania where he carried on Christian work through the Methodist Episcopal church. Teaching music during the week, he was a song leader, Sunday school teacher and youth leader in his spare hours. In addition to all this work, he edited hymnals.

He loved young people. One day, as he passed through an alley, he met a ragged fourteen-year-old girl, the daughter of an alcoholic. He invited her to his Sunday school and youth group and she began to attend.

One day he was troubled to note she was absent. “I spoke (to the class) of what a sad thing it would be when our names are called from the Lamb’s Book of Life, if one of us should be absent.”

After Sunday school, he went to the girl’s home to find her dangerously ill and sent for his own doctor, who diagnosed her with pneumonia. Death was highly likely.

Tears filled his eyes when he returned home. He went to his piano and looked through his collection of hymns. He tried to find a song to fit the thought of a heavenly roll call but could not locate one. So, he composed one.

When the trumpet of the Lord shall sound, and time shall be no more,
And the morning breaks, eternal, bright and fair;
When the saved of earth shall gather over on the other shore,
And the roll is called up yonder, I’ll be there.

A few days later, it was sung at the funeral of the girl whose absence at Sunday School roll call had inspired it.