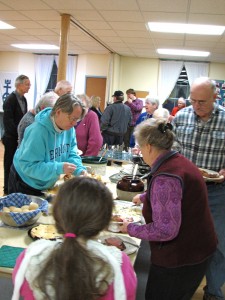 Back in 1592* new words showed up for the first time in our language. One of them was “potluck.” Some others were “townsfolk” and “vitality.” All three point to our heritage of shared meals.

“It’s hard to trace the potluck back to a specific source, but it’s fair to say the term was used in the Middle Ages to describe an impromptu meal served to unexpected guests or travelers … it wasn’t until the late 19th and early 20th century in America that the idea of a meal where everyone brings a prepared dish to share took hold.” (Julie Brown-Micko in Food Service News, Nov. 2015)

Our records from the 18th and 19th centuries do not mention church suppers. We do know that in its earliest years our members would gather in worship on Sunday morning for several hours, break for dinner and then return for another several hours. The majority of members lived in the Village, within walking distance. We don’t know what members from outlying areas did during the dinner break time, though.

What we do know is that in Bradford, as in towns and villages up and down the river valley, there was a tradition on Town Meeting Day to recess for a community meal. And during winters in the 19th century a tradition, called Kitchen Dances, grew for families to gather for a shared meal and fiddle music with friends.

In the 20th century our church saw the birth of large suppers as a way to raise funds. The Women’s Fellowship hosted the Chicken Pie Supper every Fall to raise funds for their mission work. And our Game Supper continues to after more than 60 years to raise funds for the care and maintenance of the church building. Youth Groups and Scouts also host Spaghetti Suppers to help fund their activities. In recent years the Help-India dinners have successfully helped fund schools in India. Men’s groups held breakfasts and Father-Son banquets.

When our membership was at its largest, the potluck tradition gave way to individual church club gatherings because there just wasn’t space enough for church-wide meals. Potluck suppers were a mainstay of a group of our church’s mothers who would gather over hot dishes they each brought to share while working together. The choir members and their families would gather each Spring for a potluck supper gathering. When ministers came there were potluck suppers to welcome them, and when they left we held farewell potluck suppers.

In the latter years of the 20th century the joy of potluck suppers was rekindled as membership rolls made them possible again. Several times a year there would be a potluck meal right after church.

In the 21st century this potluck supper revival is re-growing in popularity not only as a way to “break bread together” but as a way to serve our community. Every 4th Thursday we host the potluck community supper … with little organization … yet it thrives in large part because church members enjoy bringing their dishes and community members enjoy the fellowship.