“Jesus took over the phrase ‘the Kingdom of God,’ but he changed its meaning. He refused entirely to be the kind of a Messiah that his contemporaries expected. Jesus made love the mark of sovereignty. Here we are left with no doubt as to Jesus’ meaning. The Kingdom of God will be a society in which men and women live as children of God should live. It will be a kingdom controlled by the law of love.”

A young student wrote those words for a course in seminary.  No one could have known when he wrote them that he would help move the world so much closer to fulfilling Christ’s vision of the law of love.  He became the Rev. Dr. Martin Luther King Jr., and called his entire life work “an experiment in love.”  He believed America had the greatest chance of becoming a model of the realm of God  of any nation in history because of its founding principles of democracy and equality and freedom for all.  He had that dream, and he gave his life to fulfill it.  He lived and died to extend the law of love to the kind of people Jesus always did, the most vulnerable, the oppressed and the outcast.

This Sunday we honor King’s vision and his work as a model for all Christians and all churches. We will read scriptures that show how he was fulfilling the vision and work of others before him going back thousands of years.

Psalm 40 is written in the voice of one of the vulnerable people in society, a person who was lost in a pit of desolation whom God lovingly pulled up to safety.  God did not ask for a thanksgiving sacrifice in return, but rather God gave the Psalmist “an open ear” to hear the cry of others and respond with the same loving compassion that God had shown.  Isaiah 49 talks about God raising Israel, which was at the time vulnerable and oppressed as captives in Babylon, to be a light to serve the nations so that God’s realm would extend to all the corners of the earth.  And Jesus reads from Isaiah in the Gospel passage from Luke 4 , where the prophet says, “The Spirit of the Lord is upon me, because he has anointed me to bring good news to the poor. He has sent me to proclaim release to the captives and recovery of sight to the blind, to let the oppressed go free.”

We will think about how we are part of the same movement today as King and Jesus and Isaiah and the Psalmist, how God has given us an open ear to hear the cries of the vulnerable and oppressed in our society and how we respond with mercy and justice.  We will sing Precious Lord, Take My Hand, a hymn that was extremely important to King, as was When Israel Was in Egypt Land (Go Down Moses). We will also sing a hymn inspired by him, Community of Christ, set to a tune he sang countless times.  The choir will sing another of King’s favorite spirituals, God’s Eye Is on the Sparrow, as well as Let Freedom Ring by Dartmouth professor, Steve Swayne.

Below are two very different versions of God’s Eye Is on the Sparrow, one sung by one of the earliest award winning African-American Broadway and Hollywood musical stars and the other by a more recent star.  The first is a classic performance by Ethel Waters at a Billy Graham Crusade in Madison Square Garden (I believe).  The second is Jennifer Holliday (Grammy and Tony Award winning Best Actress in a Musical for Dreamgirls) giving testimony to God’s loving presence to her in her struggles, singing at Trinity United Church of Christ in Chicago, President Obama’s home church. 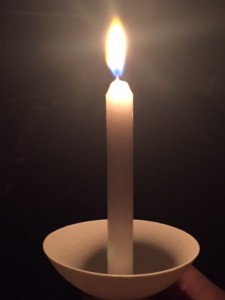